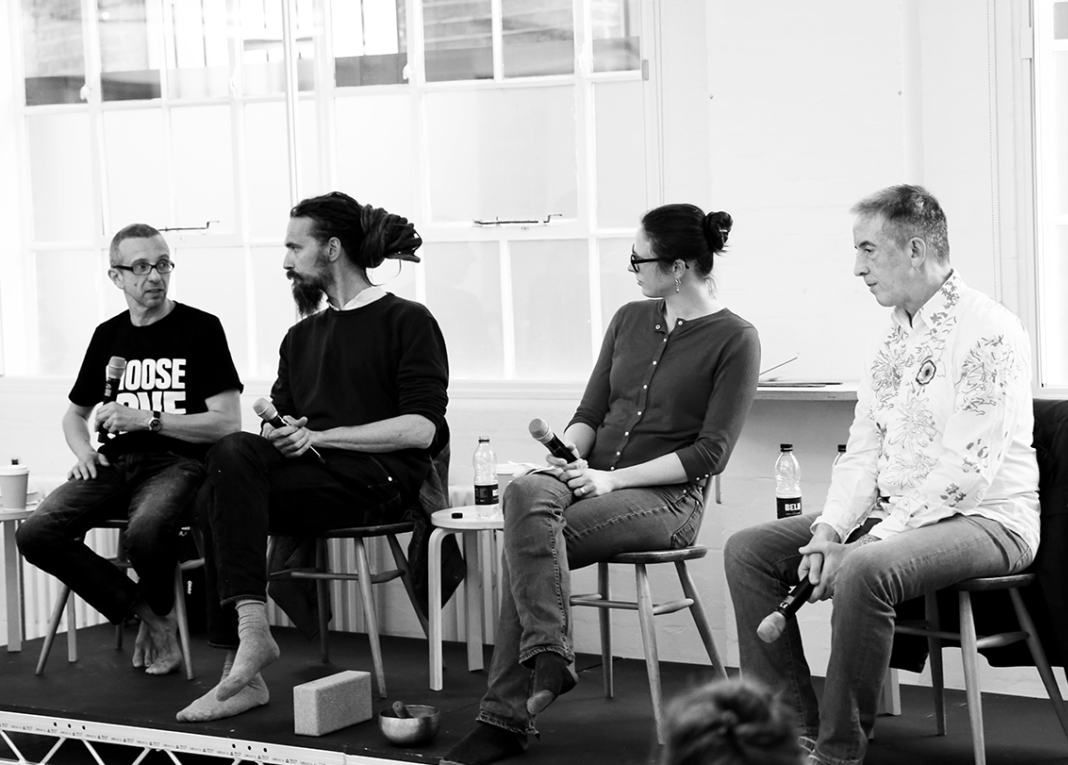 For those of us on the yoga geek spectrum, the line-up at triyoga’s Teachers Symposium on May 3, which centred on philosophy, was impressive. The full audio recording is available teachers symposium yoga philosophy. There were several highlights for me, and here they are:

“Above all be kind.” – Hamish Hendry
Hamish Hendry, certified Ashtanga teacher, gave his top tip for teaching philosophy: Start with abhyāsa-vairagya (practice and release, Yogasūtra 1.12) “but above all be kind.” Hamish said somewhat flippantly, “I try not to talk to my students too much. Especially at 5am I’m quite grumpy.” He “loves yoga philosophy” and is steadfast in that “yoga works.” Of yoga philosophy, “it’s really important you read it and study it and come up with your own ideas. Keep enquiring, it’s good for your brain.”

“Practice yoga from whatever philosophical standpoint you have.” – Jim Mallinson
Jim Mallinson, Sanskritist and world-leading scholar on the history of yoga, describes undergraduate days at Oxford dozing to the elucidation of Nyāya metaphysics and falling in with a “bunch of reprobate yogis” in India at the tender age of seventeen. He describes their views as “positively anti-philosophy. They do say there is an Absolute out there, an ultimate truth… [which is] is nirguṇa, unconditioned, and that is all we really need to understand.” Jim describes their idea of haṭha yoga as “extreme stubbornness… doing whatever it takes. A totally block-headed, direct attempt to attain liberation.” He says, “In general the attitude in Indian texts is you may practice yoga from whatever philosophical standpoint you have.”

“It’s not that morality is a bad idea but yoga is amoral.” – Carlos Pomeda
Carlos has spent years as a swami and teaching philosophy. He encouraged teachers that “when you become aware of the huge gaps in your understanding then you’re starting to become aware of your field. Don’t assume airs. Don’t pretend you know something you don’t. Continue studying but don’t let that stop you teaching.”

He spoke of his “huge problem” with the Yogasūtra being “read as if it describes haṭha yoga: This is not correct.” He said he’s “developing an allergic reaction to the yamas and niyamas,” noting a tendency to project religiosity: “It’s not that morality is a bad idea but yoga is amoral.” Carlos delights in the tantric approach of Kashmir Shaivism.

“Philosophy… an essential and undervalued skill in our lives.” – Suzanne Newcombe
For Suzanne, scholar of sociology and social history, “philosophy means something like clarifying thinking, determining whether something’s true or not – an essential and undervalued skill in our lives.” Her fascinating research into B. K. S. Iyengar and the introduction of yoga classes in the UK shows that philosophy and spirituality were originally banned. Yet yoga classes had a nuanced understanding of physical culture: “What you do with the body is where that will take your mind – a kind of applied philosophy.”

In response to concerns about the authenticity of teaching philosophy, Suzanne said, “the strange history of yoga, which originates in India,” is one grounding for authenticity, but there are others: “Your own voice is one, as is your own lineage.”