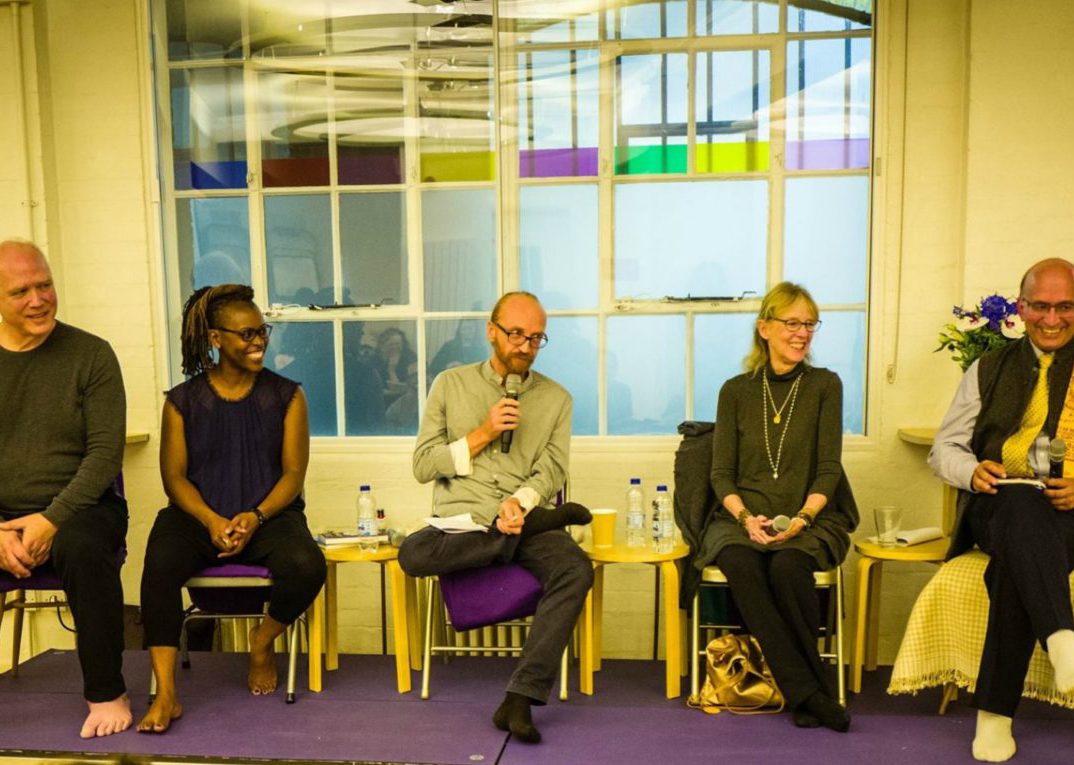 triyoga’s Symposium on Cultural Appropriation drew together a learned panel to explore the delicate question of cultural appropriate and yoga. ‘Cultural appropriation’ is the criticism that white people take cultural artefacts – ideas, styles, yoga – from people of colour, change them, commodify them, and sell them. It’s the idea that dominant, white, imperialist groups do this with no understanding or respect for the sacredness of these ideas and practices, and in the process perpetuate power imbalances and cause offence to the lineage holders of these traditions.

The full recording is available https://soundcloud.com/triyogauk/04-cultural-appropriation-in-yoga.

Asked to speak on behalf of the West and its contribution to yoga, with a self-deprecating flourish Max said, ‘Some of the teachers that came and brought yoga to us – we didn’t go steal yoga – some of them weren’t nice. Some were nice. Some left in scandal. Some taught us things for which we will be forever grateful. I think the West is now bringing science, studying the neurological, positive effects of yoga… yoga is becoming safer.’ Max suggested that ‘we have to be selective in which traditions we integrate. We need to ask questions and I don’t think it’s petulant to do so.’

‘maintain humbleness and humility’ – Dr Stacie CC Graham
Stacie said we need to appreciate yoga is a tradition stemming from South Asia. It’s in the UK because of colonialism and the British empire: ‘How we practice today has to be seen in that historical context.’ In teaching, she spoke of meeting people where they’re at, of not reaching to beads, statues and incense when done for the appearance of authenticity.’

She noted the subtle forms of discrimination that keep people from a class: cost, type of body, clothes, and her teacher training programme created specifically for women of colour. Born out of a real desire to create access for people who wouldn’t normally have it, ‘an opportunity for black and brown women to train together… the guard is down because you’re training with people who have similar points of departure.’

‘the best we can do is listen’ – Jason Birch
Jason spoke of the benefits of studying yoga’s history, the personal practice of many academics, and the political agendas behind cultural appropriation and the promotion of yoga as part of Hinduism worldwide. ‘Education in the history [of yoga] helps to enrich the culture around the practice. Academic work, not only in the West but also in India, where there has been a lot of work going on in the history and practice of yoga, has made a very valuable contribution to our understanding of yoga.’

In relation to the spread of ideas, he said, ‘You can’t seal off cultures and stop ideas moving from one to another. It’s inevitable. It’s so valuable… It’s the history of modern yoga and goes back to the medieval period when people in India were appropriating yoga practices which were coming to the fore, whether they were Śaiva, Vaiṣṇava, and so on.’

‘we need to find the truth stream that resonates with us’ – Sally Kempton
‘I fall into that category of Western women who fell in love with their guru. My heart had been struck and opened by the transmission from my teacher. He took me to India and immersed me in an ashram culture. Did this feel weird to live as an Indian swami in a culture that was not my own? What felt weird for me coming from a journalist background was to be plunged into a religious culture.’

Beginning her studies with Swami Muktananda 45 years ago Sally became his cultural interpreter: ‘Aspects of your natural cultural are overlooked, sacrificed in an experience of personal transformation – experiencing the self as ātman, of truth, of love… My guru’s aim was to translate those teachings into a way that people could relate to.’

‘just because you want to doesn’t mean you have a right to’ – Satish K Sharma
For Satish, ‘The freedom to traipse around in the intellectual mind webs of other nations is damaging.’ He defines an ācārya as one who has been entrusted as a custodian to ensure that the tradition is preserved and passed on for further generations. He warned, ‘each and every one who wants to walk this path should know they do not know as much as they think they do.’ He said, ‘We’re very happy for people to practice. It’s only when people step onto a stage and say this is yoga. We are all facets of the same diamond and exploration is a part of that.’