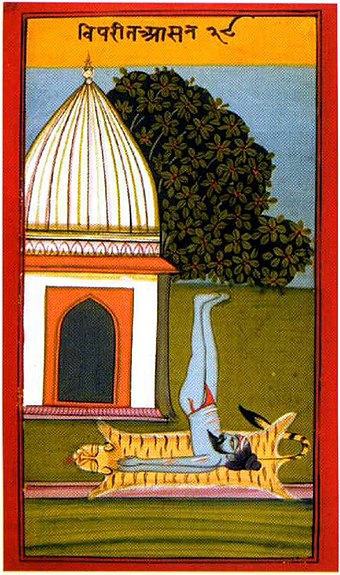 The Vivekamārtaṇḍa on pratyāhāra in viparītakaraṇī with James Mallinson

James Mallinson, Reader in Indology and Yoga Studies at SOAS and Principle Investigator of the Hatha Yoga Project (http://hyp.soas.ac.uk/) read a passage from the Vivekamārtaṇḍa on Tuesday 8th October 2019 co-hosted by the Sanskrit Reading Room and the Centre of Yoga Studies. Dr Mallinson has been preparing a critical edition of the Vivekamārtaṇḍa as part of his five-year ERC-funded project which is now entering its final year. This work has recently been read at a workshop in Portland, Oregon, with leading Sanskritists pooling their expertise. It was exciting to see this process at work in our London reading.

The colophon attributes the Vivekamārtaṇḍa or ‘Sun of Discernment’ to Lord Gorakṣa. The text is 12th– 13th-century and the earliest manuscript Dr Mallinson has studied was copied in 1477 by a Jain ascetic in Rajasthan, south of Jodhpur. The Vivekamārtaṇḍa vies with the Haṭhapradīpikā to be the earliest and most influential text on haṭhayoga. The oldest known manuscript of the 15th-century Haṭhapradīpikā is dated 1497 CE. The more than 200 manuscripts of the Vivekamārtaṇḍa give many names, one of which, the Gorakṣaśataka, is also the name of a different text Dr Mallinson is editing. The Vivekamārtaṇḍa is the only text being edited by the Hatha Yoga Project of which it has not been possible to collate all the witnesses. At this reading session Dr Mallinson presented an edition of the recension of the text as presented in its earliest known manuscript.

The Vivekamārtaṇḍa describes a yoga of six auxiliaries (aṅgas), connecting it with earlier Śaiva Tantra, and six vortices (cakras). Dr Mallinson suggested this mapping of the aṅgas with the cakras was a little forced as some aṅgas are associated with one or two cakras, and some with none. The Viśuddhicakra, located at the throat, is associated with pratyāhāra, the subject of the verses we read in this session. Pratyāhāra or ‘withdrawal’ is detailed in verses 103-131 of the 173-verse text. Uniquely, one of the methods of withdrawal is viparītakaraṇī, ‘the inverter’. This technique involves turning the body upside-down in a shoulder stand in order to reverse the flow of the body’s vital energies. The mechanics of the practice are taught in some detail in this passage.

Please access the audio recording of the session for full details.

Mallinson, J., 2007. The Khecarividya of Adinatha: A Critical Edition and Annotated Translation of an Early Text of Hathayoga, 1 edition. ed. Routledge, London.