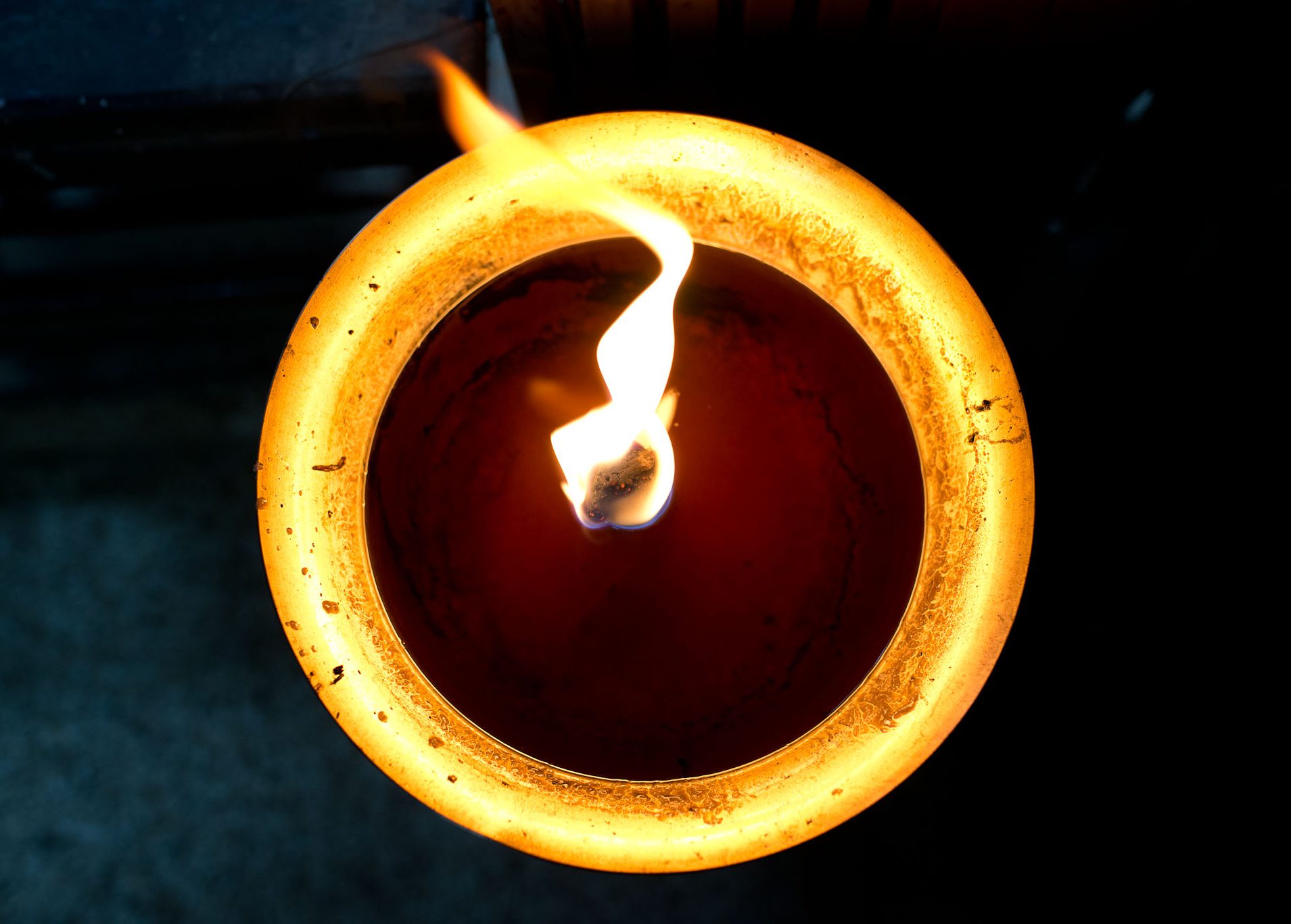 As yoga practitioners we are technicians, cultivators of precise action. Action that binds together and focuses our bodies, hearts and minds. Action that reveals truth. Rather than pursuing narrow and hazily perceived self-interest, acting within the form of sacrificial offering decentres our egoic self. The
egoic self, or who we think we are, is characterised by name and form (nāmarūpa). Executing required action as skilfully as we can lets nāmarūpa drop away. Whatever is revealed in its place is inexpressible because it is not what we think it is.

Poetry is one way of approaching inexpressible truths, such as in this passage from chapter four, translated by W. J. Johnson:

Some skilled performers concentrate on sacrifice to one of the deities; some offer sacrifice through the sacrifice itself into the fire of Brahman;

Some offer all actions of sense and breath into the fire of the discipline of self-restraint, kindled by knowledge.

Similarly there are others, sacrificers with material substance, with bodily mortification, with spiritual exercise, with Vedic study and knowledge – ascetics with uncompromising vows.
And again, those whose object is breath control offer the inhaled into the exhaled breath, and the exhaled into the inhaled, restricting their passage.

Others, who have put limits on their consumption of food, offer their inhalation into their exhalation. All these, who know what sacrifice is, have their imperfections obliterated by the sacrifice. (BhG 4.24-30)

The Gītā’s verses on sacrifice can be deployed on the mat. The sequences of āsana are test tubes within which whatever is arising in our bodies, hearts and minds is heated, catalysed. Seeing our patterns, our hates and fears as honestly as we can allows them to be released. The residue of our actions, unintended consequences or errors, are burnt up in the fire of awareness. In the terminology of the Yoga Sūtra, this is abhyāsa and vairagya (Yoga Sūtra 1.12). Abhyāsa, continuous practice that reveals patterns of behaviour and its cause, can be practiced on the inhale. Vairāgya, letting go, letting go of everything, can be practiced as we exhale.

The tissues of our body can be viewed as the medium of sacrifice both physically and esoterically. Richard Freeman eloquently deploys a motif of prāṇa and apāna to elaborate patterns of moving, breathing, feeling and thinking that he develops from these passages, particularly BhG 4.29. He describes the processes of haṭha yoga as squeezing, wringing out the body to release the nectar of immortality – amṛta bindu – that the yogi stores in and drinks from her own cranium bowl. This is akin to the Vedic sacrifice of pressing the soma 1 to release the nectar of immortality that the poets ritually imbibe.

Sacrifice as a technique of decentring the egoic self coheres with other key concepts in the Gītā. Kṛṣṇa is not merely the supreme god but the source and resolution of everything. Arjuna’s terrifying vision of Kṛṣṇa’s all-encompassing form in the theophany of chapter 11 also serves to decentre his self. And the ultimate vision of bhakti, or devotionalism, again decentres our limited ideas of who we think we are. Instead bhakti sees all beings in our hearts and us in the heart of God. Humanity and God are reflected in one another, dear (priya) to each other (BhG 18.65).

In our attempts to decentre the ego, to offer the fruits of our actions to others, to place others in our hearts, we must fail. Frequently. Always actions will entail imperfections, residues, and unintended consequences. And Kṛṣṇa offers us the salve, the relief of imperfections obliterated: “As a lighted fire reduces kindling to ash, in the same way, Arjuna, the fire of knowledge incinerates all actions” (BhG 4.37). Kṛṣṇa says it behoves us simply to be aware of ourselves, our desires, and our motivations. To be brilliantly aware.

I find the wider context of sacrifice in the Mahābhārata and the Vedas fascinating. The Gītā is often treated as a standalone text yet it comes from the heart of India’s colossal epic tale the Mahābhārata, which is part history, part mythology, and part philosophy. The epic, which emerged between 500 BCE and 500 CE, teaches sukṣma dharma – that the right path is subtle and realpolitik is necessary. When seen in this context the Gītā’s teachings become much more nuanced and contested.

The Mahābhārata, like the Upaniṣads, is permeated with motifs of sacrifice. The stories that are woven together to form the Mahābhārata would have been narrated on the occasion of great sacrifices. Bards tell tales at sacrifices, about sacrifices. The Mahābhārata opens with a snake sacrifice and after their jaded success the victors perform a horse sacrifice. The horrific interfamilial bloodshed of the war at the centre of the story can be seen as “a comprehensive human sacrifice” to restore order disrupted by “extreme disorder in the warrior class” (Davis, p. 35).

The expression of sacrificial action we hear in the Bhagavad Gītā owes a lineage debt to Vedic Brahmanism (1500 to 500 BCE). Sacrifices (yajña) are private or public ritual practices involving specific actions, words and intentions. The objectives range from the acquisition of personal power (in love, in war) to controlling the natural world (rains, seasons) and maintaining cosmic equilibrium (the natural order, the relative position of gods, humans and demons). Vedic sacrifices transform the sacrificer (yajamāna) through enactments of death and rebirth tempered with fire. During the Vedic period the sacrifice became a powerful device or template through which humans could interact with the divine (building on ideas developed by White, p.11, in relation to tantra). It was believed that sacrificial action performed correctly was efficacious: The desired result was bound to occur. Sacrifice, nay magic, works because the technician of the sacrifice knows the secret connections between objects and spheres.

One way magic or connections between things was established was through etymology, the origins of words and sounds. In the Gopatha Brāhmaṇa, Brahman’s2 heated effort of tapas produces sweat. Sweat or sveda has etymological connections with su-veda or excellent knowledge: “The heated effort of tapas yields sweat that is knowledge,” (Kaelber, p. 63). We move from one sphere – heating our body to produce sweat – to another, that of knowledge or insight.

Kṛṣṇa says it behoves us simply to be aware of ourselves, our desires, and our motivations. To be brilliantly aware.

The culmination of the Vedic period saw the poetphilosophers of the Upaniṣads (800 to 200 BCE) take the structure of the sacrifice as a starting point for delving into esoteric knowledge of brahman. Brahman is the truth, the way, knowledge or the subtlest answer. Most of the classical Upaniṣads open with the form of a Vedic sacrifice before diving into subtle questions, riddles, paradoxes and occasionally answers. The Gītā also uses the structure and language of the sacrifice to dig for truth.

The poetics of sacrifice in chapter four of the Bhagavad Gītā reverberate with the history and the power of sacrifice. Appreciating how the technology of the sacrifice was thought to have worked might mean that we can bring these ideas to life as we practice on our mats and as we live out our lives.

True sacrifice implies that the object of sacrifice be of great value. The Kaṭha Upaniṣad opens with a father using barren cows as a sacrificial offering. His son, the child Naciketas criticises his action. Angered by his son’s exposure of hypocrisy, the father curses him. Naciketas must travel to the abode of Death (Yama). In the father’s unintended reversal, the child has replaced the sacrificial cow.3

The yogic sacrificer applies the heat of action and the fire of discriminative awareness to release false conceptions of the world, of others and of themselves. Which opens a space.

1 – Soma is a long-lost drug, an entheogen, thought to have prompted experiences of insight, wisdom, courage and creativity.

2 – This is an account of the origins of the universe and sentient beings with Brahma or Brahman as the Primal Being.

3 – It’s ok Naciketas does not die. And I am definitely not suggesting we sacrifice children.