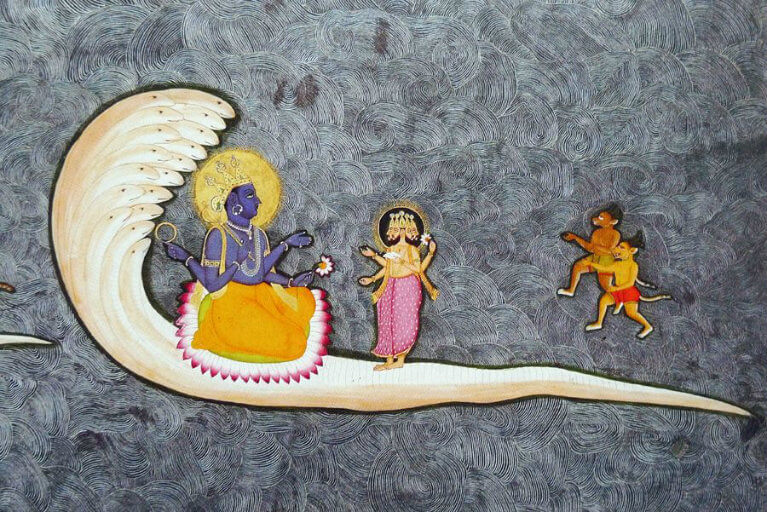 Ruth Westoby teaches five seminars on the history and philosophy of yoga. This package includes a guided tour of the British Museum.

This session will overview the history of yoga in the last 2,500 years as well as tracing components back 4000 years. Through a timeframe and thematic breakdown Ruth will present the principle definitions, practices, and objectives of yoga, and what is known of the lives of practitioners. This session will particularly focus on precursors of yogic concepts in the Vedas and the construction of yoga as we might know it in the Upaniṣads and renunciatory (śramaṇa) movements, which include early Buddhism. We will explore the ideas that underpin Indian thought: karma (retributive action), duḥkha (unsatisfactoriness), saṃsāra (the wheel of repeated birth and death), and mokṣa(freedom).

The second session will focus on the key philosophical doctrines that underpin the practice of yoga. Ruth will present an overview of the schools of Indian philosophy and theology (darśanas) before examining in more detail those schools vital to an understanding of yoga: Sāṃkhya, Vedānta, and early and Mahāyāna Buddhism. Sāṃkhya is the school most closely associated with the Pātañjalayogaśāstra and presents a dualistic metaphysics of the individual in the world. The world and our experience of it are set out as categories interwoven with the guṇas or strands of material nature or experience. Sāṃkhya teaches that this world exists to set us, experienced as pure consciousness, free. Vedānta has become the philosophie par excellence of India and the lens through which yoga is seen. Śaṅkara, the principle teacher of Advaita Vedānta, presented a monistic system at variance with the dualism of Sāṃkhya. Subsequent Vedānta teachers developed and further popularised these ideas, reinterpreting classical yoga along Vedāntic lines.Buddhist teachings are closely woven into the fabric of the Pātañjalayogaśāstra. This overview of the history and doctrines of Buddhism focuses on Early Buddhism and Mahāyāna Buddhism to present the intertwined relationship between yoga and Buddhism from its inception, development, and modern integration with mindfulness practice.

This session presents two of the most iconic texts on yoga, the Bhagavad Gītā and the Pātañjalayogaśāstra. The Bhagavad Gītā or Song of the Lord dramatically sets sublime spiritual teachings against the backdrop of an horrific and devastating war. The god Kṛṣṇa and the warrior Arjuna stand amidst armies arrayed for destruction and discuss how to live in this imperfect world. Kṛṣṇa interweaves key spiritual teachings on yoga to counsel correct understanding, skilful action, the discipline of yoga, righteous violence and divine love. In its long reception history the Gītā has been a fundamental source text for Vedānta, it has been revered as the Hindu bible, and its teachings have been called upon by spiritual seekers and teachers of yoga.

The Pātañjalayogaśāstra, or Patañjali’s Yogasūtra, has been the go-to text for paṇḍitas and practitioners alike in pursuit of precise teachings on the practice of yoga. Compiled around 350 CE the Yogasūtra builds on the metaphysics and psychology of Sāṃkhya to presents many practices for stilling the movements of the mind and achieving a meditative state of introversion, samādhi or aloneness, kaivalya. The text has surprisingly little to note on postures, āsanas – surprising, that is, when the text is perceived as the most important text on yoga, which in the modern world is identical with posture. We will use what the text and its commentaries do say on āsana to tease out the historical incorporation within āsana of severe physical penances (tapas) and the later proliferation of of āsana.

Tantra is a complex array of schools, texts and practices developing from the 6th and 7th centuries CE in both Hindu and Buddhist contexts. It builds on the metaphysics of both Sāṃkhya and Vedānta and develops elaborate embodied ritual practices and paradigms such as Kuṇḍalinī and the yogic body which become the foundation of later haṭhayoga practices. As the scholar Biardeau notes, Tantra is ‘an attempt to place… desire, in every meaning of the word, in the service of liberation… not to sacrifice this world for liberation’s sake, but to reinstate it, in varying ways, within the perspective of salvation.’ This session will outline the general approaches of Tantra and focus specifically on the 10th century CE developments in Kashmir Śaivism associated with the teacher Abhinavagupta.

Haṭhayoga develops from the 11th century drawing on Vajrayāna (Buddhist Tantra) and Hindu Tantra (especially Śaivism). We will explore the emergence of haṭhayoga, its yogic body paradigms, its technologies for manipulating those ritualised structures, and its apparent disregard, or in James Mallinson’s words, its ‘insouciance’, towards metaphysics. Whilst drawing on a number of haṭhayogasources we will focus in particular on the c. 1450 Haṭhapradīpikā, a watershed text in the history of yoga which gives an account of the theory and practice of yoga as we understand it today. It enriches classical meditative practices and severe physical mortifications with Tantric ideas. It teaches calming the mind through stabilizing the breath or life-force, prāṇa. It details diet, posture, breath work, cleansing techniques, energy locks and visualizations. These transformative technologies generate heat and pressure, purify liquid to distil the nectar of immortality, and trace sound through to the dissolution of the soul.

This session at the British Museum is an opportunity to explore the history and philosophy of yoga through a direct encounter with the material culture of this tradition. We are likely to be awed by the antiquity, beauty and spiritual significance of the artefacts whilst also reflecting on the historical trends, at times characterised by power inequity and violence, that brought these artefacts to Central London. Before viewing objects in the South Asia Gallery we will frame some questions for the visit and note key artefacts to locate. Following a tour of the gallery we will pause to reflect on our experiences and interactions of the sacred in the secular and what we can learn of the history and practice of yoga. Drawing on the Indian tradition, material culture scholar Daniel Miller notes that ‘Wisdom has been accredited to those who claim that materiality represents the merely apparent behind which lies that which is real.’ However, he goes on to argue that, ‘paradoxically, material culture has been of considerable consequence as the means of expressing this conviction.’

This final session traces the development of modern yoga wrought from pre-modern haṭhayoga and melded with world trends of physical culture and psychotherapy via the forces empire and globalisation. Modern yoga is the posture focused form that has developed in the last two hundred years through interactions with globalisation, colonialism, Indian nationalism, Western Esotericism and neoliberalism. This session will explore the many influences on modern yoga, and the many modern yogas.

Some of the critical issues at play in contemporary yoga will be outlined and space will be opened to discuss our responses. These issues include cultural appropriation and identity politics, gender, lineage structures, abuse and guru-disciple relations, social media and commodification of yoga and the yoga body.

Individual sessions can be taken as standalone units or the course can be taken as a whole. Whilst each session will build on the material presented in earlier sessions a recap will be given to enable students to attend individual sessions. Some sessions will open with chanting sections of texts relating to the subjects of study. The lecture will be accompanied with rich visual images. Primary sources, key concepts and further reading suggestions will be given. There will be plenty of time for contemplation and discussion. Whilst there will be sitting practices there will be no postural practice. The best text to accompany these sessions is James Mallinson and Mark Singleton’s Roots of Yoga, published by Penguin in 2017.